Opportunities in the chaos

At first glance, the volatile economic conditions which have prevailed since the global financial crisis have mostly downsides; accelerating change, greater uncertainty and hard-to-manage-complexity.

Although some big businesses are earning record profits, yet employing fewer workers, others are facing intense competition – and oblivion - threatened by products and services that are faster, smarter and more glamorous.

On the way out to the scrap heap of history are household names like Blockbuster and Borders and jobs such as bank tellers, travel agents and journalists. Yesterday's technological heroes such as Nokia and RIM are challenged by a resurgent Apple, now one of the most cashed up corporations in the world, but a decade ago near death's door.

In key industries, particularly high-tech manufacturing, talented people are increasingly hard to find, especially those with math, science, complex project management and leadership skills. Some cities, states and countries are running huge deficits, defaulting on their loan repayments or slashing pensions and public services. People in previously “safe jobs” such as teachers, police, firemen are being fired to save money. Others are being asked to do more.

Meanwhile one in five young people leave school unable to read, write or count adequately for the new kinds of jobs that will become available. We are already starting to see civil unrest in the UK, Greece and other countries which have been unable to change ahead of the changing times.

Fortunately there is a very simple explanation for the chaos and the contradictions. And some good news as well, because just around the corner, if we make the right investments, tens of millions of new, more amazing and interesting jobs are on the verge of being created.

The new jobs will be needed so business, government and social entrepreneurs can develop and deliver an avalanche of really clever products and services that will help create a better world, allow people to live more lightly on the planet, do things for ourselves only experts could do, and be more productive and efficient, all at the same time.

According to a new theory of social and technological change, the chaos we are all experiencing is symptomatic of a shift to a new stage of human development, the Wisdom Age. It’s all happened before...in the 1700s, the 1930s and the 1980s. It is only when we look at the long term picture can see the pattern to the change. 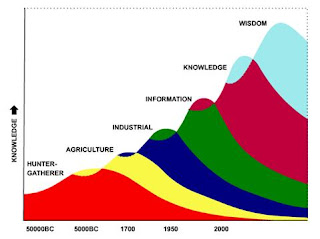 The new era that’s just starting to emerge, the Wisdom Age and its’ business equivalent, the Wisdom economy, is characterized by “the wise application of knowledge”. It is the next step up in the data hierarchy from computer science....activity, data, information, knowledge and wisdom.

With each new wave, the technologies, products and services of the new era automate and/or eliminate the dominant work of the immediate previous era, and are as much as four to ten times more efficient and/or productive than the predecessor technologies they displace. Some of the shifts have been dramatic, like the displacement of the typewriter by the computer, the switch from horse and buggy to automobile, or the succession of music delivery systems,  vinyl-to-tape-to-CD-to-iPhone.

As we make the transition to this new world, there will be some bumps along the way. And it’s not just ordinary people who are affected by job losses.

The CEOs of the world’s biggest corporations are also caught up in the whirlwind. In 2009, they told the IBM CEO Global Survey that rapid change was the No. 1 problem facing business leaders. This year it’s complexity that CEOs are struggling with.

The changes in the jobs market confirm the new model.  In 1900, in the USA (and similarly in other OECD countries) 30 percent of people were employed in agriculture, which dropped to 3% by 2000. Manufacturing, mining and construction employed about 30% of all people in 1900 but declined to about 14% in 2000. Knowledge work rose from 8% to 30% of the working population. A century ago 5% of homes and 10% of factories had electricity. Eighty percent of farm production was required to feed horses, for transport. The computer, the Internet, the mobile phone and the shopping mall had yet to be invented. 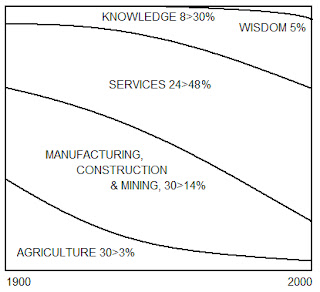 A new category of work "Wisdom work"has appeared involving the creation of jobs such as global governance director, chief cultural officer and organic food auditor, which reflect a new focus on ethics, interdependency, sustainability, and meaning making. And the old farming, manufacturing, office or retail jobs are changing. Much higher skill levels are now needed to more wisely and reliably produce, store and ship raw materials, food, people, methods and products all over the world, design and build safer and healthier communities, or reduce our impact on the planet and other species.

The waves of change follow a predictive pattern, which, as it turns out, obeys the laws of complexity theory. The shifts are a period doubling cascade, where each new wave is about one-fifth the length of its predecessor, approaching a limit - the Feigenbaum number, 4.669. We find these patterns in all kinds of complex emergent systems, brains, markets, nature and the weather. There's a lesson to be learned from ecological systems. When the shift to a new kind of order occurs, some species die out - think the dinosaurs - and new species emerge - think mammals and us. Each new level transcends and includes its predecessor. 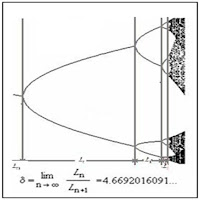 In the shift from one era to the next, there is always a chaotic period before the change, as organizations work out what is happening, make investments in new equipment and methods, develop new products and services and help people acquire the new skills to do stuff in new ways. And if they do not adapt fast enough, incumbents can be wiped out by what the Austrian economist Schumpeter called "creative destruction."

At each transition, there is also been a fundamental shift in how work is organized which results in dramatic changes to the structure of organizations. In the Industrial Age it was the hierarchy with someone in charge. Next came the decentralized model as many corporations grew nationally and internationally;  control remained at the centre but some autonomy was delegated to the regions. As organizations grew into complex webs of suppliers and resellers the network became the dominant form.


Now organizations are starting to think of themselves as "complex adaptive systems", flexible highly interconnected network of systems that interact and transform each other over time, that are more like an interdependent ecology than a network. When we think about organizations this way, it helps us navigate what thought leader Peter Vail calls “permanent white water”.

The drivers of the current round of increased complexity include:
Although complex adaptive systems can behave chaotically, they are in fact, self-organizing and emergent. New order is generated as they develop.

The big questions are:
A new science of management based on the laws of complexity, fractals and neuroscience is showing promise as the way to “dynamically steer” organizations in new “emergent” ways. It is early days, but here are some of the core principles:

The start of a new era

During the 20th Century the world has been shaken by three huge waves of social and technological change, the tail end of the Industrial Age (1700-1950), the entire Information Age (1950-2000) and the Knowledge Age (2000-2010).
A new kind of world is emerging from the rubble of the global financial crisis that has caught many governments and old economy industries unprepared. It's the Wisdom Age - and with it the Wisdom Economy  - characterized by products and services incorporating the "wise application of knowledge".
Posted by John Findlay, PhD, MBA at 11:08 PM 1 comment: